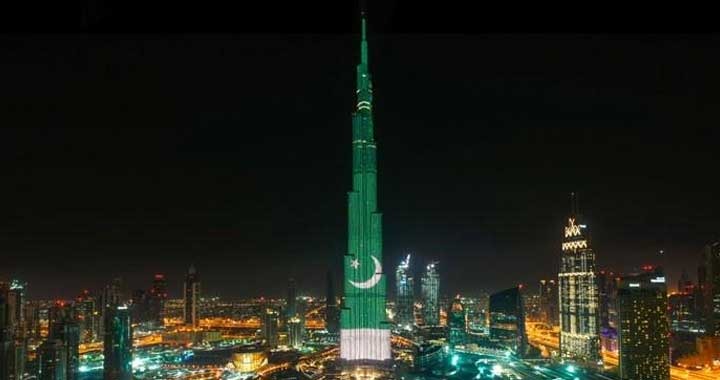 UAE based Pakistani expatriates gathered in large numbers at diplomatic missions in Dubai and Abu Dhabi to celebrate the 78th Pakistan Day on early Friday morning where they listened to the speech, national songs, waved Pakistani flag, and enjoyed the festivities.

Pakistan Day is celebrated on March 23rd each year. The resolution was passed on the March 23, 1940. The Founder of Pakistan Mohammad Ali Jinnah presiding the session where the resolution was presented. The day was a reminder of the struggles, the nation had to face to come into existence.

The Cabinet Member and Minister of Tolerance Sheikh Nahyan bin Mubarak Al Nahyan, and The Minister of State Maitha bint Salem Al Shamsi, were the chief guests at the occasion.

Ambassador of Pakistan Moazzam Ahmad Khan, hoisted the flag in the morning at the embassy.

Pakistani Brigadier (Retd) Syed Javed Hassan said in his address, “In order to elevate the standing of Pakistan as one of the foremost nations of the world, the emphasis must be placed on education.”