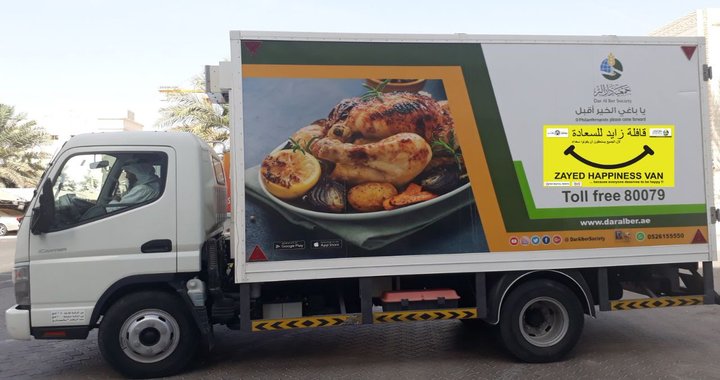 Dar Al Ber Society launched ‘Zayed Happiness Van’ on Sunday at 12:00pm with a tagline ‘because everyone deserves to be happy’.

The aim of ‘Zayed Happiness Van’ is to spread happiness among the underprivileged people of UAE by providing them a free meal.

Every week they will visit the various labour accommodations, industrial areas and other areas around the city and distribute free food and other items of personal use.

The Society officials reached in the van that was loaded with food, gifts and other giveaways. They asked people a few questions related to what the charity does. Workers who gave the right answers were gifted with restaurant vouchers. One lucky winner also won a return ticket from Air Arabia.

The labour accommodation incharge Lional Terence, who won the return ticket said that he could not believe his luck. The late Sheikh Zayed’s birthday has been so lucky for him as he won this ticket and he will using this to visit his family back in India.

The CEO of Dar Al Ber Society Abdullah Ali Bin Zayed Al Falasi said, “The Zayed Happiness Van is meant to serve as a tribute to the spirit and the vision of our late great leader the late Sheikh Zayed Al Nahyan.”

The deputy director at the Dar Al Ber Society Hisham Al Zahrani said, “Betterment of the underprivileged sections of the society is one of the top priorities of Dar Al Ber Society. We feel deeply for our labourer sisters and brothers who are away from their homes and families and that’s why we thought of launching this initiative around the time of the International Labour Day at this accommodation.”

A charity initiative expert at the Dar Al Ber Society Juhi Yasmeen Khan said. “It is Sheikh Zayed’s birthday and we wanted to celebrate it by surprising and spreading smiles among workers who are such an integral part of our society and also because a good surprise is one of the most effective ways of giving happiness to people. We have started with Dubai but we are also looking to take this initiative to the other emirates as well soon.”

Worker Abu Qasim said that this was a perfect Eid gift for them as he was looking to get his Eid clothes and shoes soon.