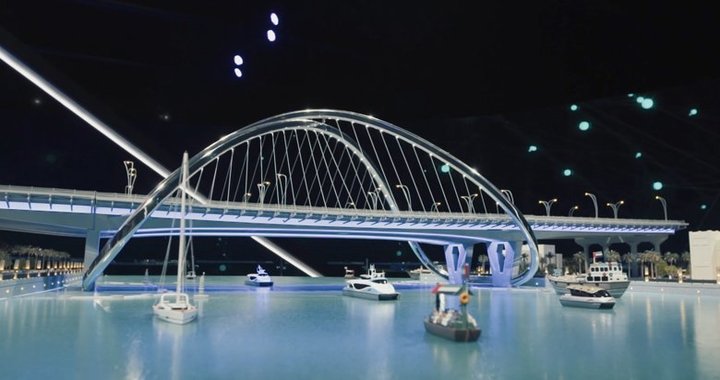 The Vice President and Prime Minister of the UAE and Ruler of Dubai HH Sheikh Mohammed bin Rashid Al Maktoum has launched the construction of the Dh394 million Shindagha Bridge Project.

The Director General and Chairman of the Board of Executive Directors of the RTA, Mattar Al Tayer said that the new bridge is being developed under the third phase of the Shindagha Corridor Project after the completion of the first two phases. The bridge extends about 295 m, 150 m of which is over the Dubai Creek and consists of six lanes in each direction in addition to a pedestrian crossing. It rises 15.5 m above the water level which allows the passage of various types of boats plying the Creek. The iconic design features an architectural arch shaped in the form of the mathematical symbol for infinity. The top of the infinity arch rises 42 m. About 2,400 tons of steel will be used in the construction of the bridge.

The Shindagha Bridge is part of the AED5 billion Shindagha Corridor Project extending 13 km along Sheikh Rashid Street. The Bridge rises 15.5 metres above the water level, allowing the passage of various types of boats plying the Creek. pic.twitter.com/XPvrlXgEWe

The first two phases of the Shindagha Corridor Project have been completed in 2016.

Phase V covers the construction of Deira Southern Island, with bridges spanning 1.5 km is expected to be completed by 2027.