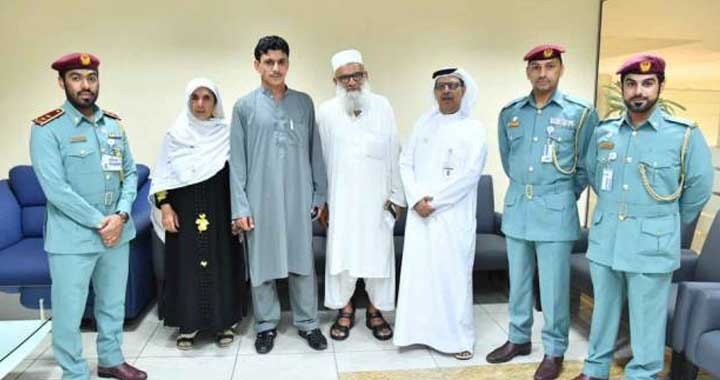 In 2012, when he was only 21 years old, he came to UAE from Peshawar, Pakistan in search for a better job.

Ayub, who work as a driver for a government firm said, “I didn’t have enough income to go home and see them. My mother always asked me to come home and get married, but I have been working to save up here,”

GDRFA staff allowed his parents to meet him while they were transiting on a four hour stopover through Dubai from Jeddah to Karachi, Pakistan. They had gone to Saudi Arabia to perform Umrah.

Transiting passengers are not allowed to meet with anyone from outside the airport while they wait for connecting flights but under the supervision of Lt. Col. Ibrahim Hamad, director of passport control department, the team quickly arranged the meeting between parents and son at a private hall in the passport control section of terminal 3.

After meeting Tahir Ayub said, “I was so happy to see them and they made a lot of prayers for me.”

Major General Mohammad Ahmad Al Merri, director of GDRFA, said “We wanted to make the son and his parents happy. Serving people is the true meaning of happiness.”