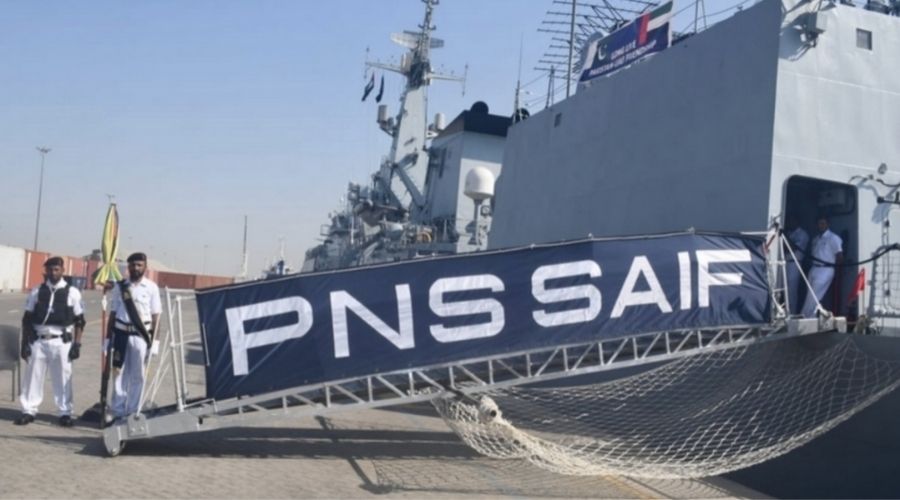 As the relations between UAE and Pakistan grow stronger with every day, Pakistan Navy Ship (PNS) ‘Saif’ has arrived at Dubai’s Port Rashid as part of a goodwill gesture.

“On behalf of Pakistan Navy we are extending our warm gratitude towards the UAE Rulers and the people of UAE,” Captain Hamid Sajjad, Commanding Officer said.

The ship is part of the regional maritime security patrolling to have been deployed in ‘choke points’ in the Strait of Hormuz, Horn of Africa and the Arabian Sea and protect different kinds of ships in the international waters, Captain Hamid Sajjad, Commanding Officer said. “Pakistan has been a staunch supporter of an integrated approach to combat the menace of piracy. We share the will and desire to make all efforts for eradication of piracy and elimination of its underlying causes,” Captain Hamid said onboard Saif.

The PNS (Pakistan Navy Ship) Saif is a frontline ship equipped with state-of-the-art weapons and sensors. The 123-meter longship is in operation since 2010 and part of the Pakistan Navy fleet with 14 officers and 188 CPOs and sailors while equipped with an anti-submarine helicopter, surface-to-surface and surface-to-air missiles besides close-in a weapon system.

The Pakistan Consulate in Dubai and the Northern Emirates had organized a visit for local media on Saturday to board the warship and meet the officers and facilitated a guided tour around the ship.

During the 3-day stay at Port Rashid, the ship was visited by a huge number of people in UAE.

His Highness Sheikh Mohamed bin Zayed Al Nahyan, Crown Prince of Abu Dhabi and Deputy Supreme Commander of the UAE Armed Forces, made his first visit of 2020 to Pakistan on Thursday.

Frequent exchange of high-level visits between Pakistan and the UAE is “reflective of the importance that the two countries attach to their fraternal ties,” the Office of the Spokesperson of the Ministry of Foreign Affairs Pakistan said recently.

In a statement issued on the occasion of the recent visit of His Highness Sheikh Mohamed Bin Zayed Al Nahyan, Crown Prince of Abu Dhabi and Deputy Supreme Commander of the UAE Armed Forces, to Pakistan, the Ministry said that the visit illustrates the strength and substance of the Pakistan-UAE special relationship, based on commonalities of faith, cultural affinities, and a shared resolve to take mutual cooperation to a new level.