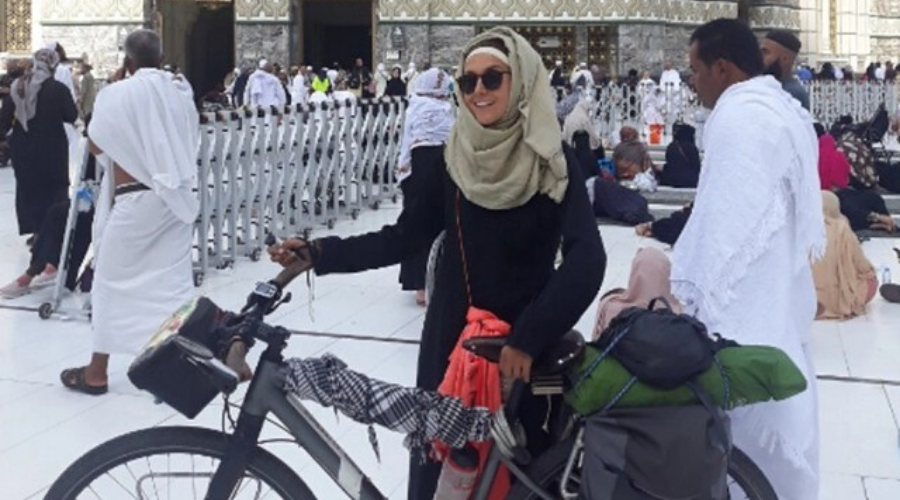 This week history has been made as Sara Haba, a cyclist from Tunisia was able to make her way to Makkah on her cycle. The hefty journey took 53 days to complete covering Egypt and Sudan on her own. Sara Haba became the first woman to reach Makkah on a bicycle.

The courage and motivation of young woman is quickly becoming an inspiration for thousands of Muslims around the world.

Paddling her way to Makkah, Sara started her long journey from the deserts of Egypt, making her way into Sudan and finally made it to her destination. Sara had made a plan on what route she wanted to take but travelling alone through and through would have been a daunting task on its own. Sara used to cycle 8 hours a day and did the repairs for the cycle when needed herself.

Haba named her bike Merzouga, which can be translated roughly to “grace with blessing” in Maghrebi Arabic.

“I was afraid to be stopped at any point. I didn’t know if my body will follow my will and accept all that I was imposing to it,” she wrote on Instagram.

Sara was worried that if she will be allowed to enter the Haram in Makkah due to the strict rules and regulations in the country.

“In Saudi Arabia, where the distance and the difficulty were really small in comparison with what I went through, I was tensed before reaching Mecca as I really didn’t know if I would be allowed to enter the city, cycling by myself,” she added.

She documented herself about her traveling and became famous. She emphasized on #CyclingToMakkah hashtag for her posts. Sara also wasn’t sure if she was fit enough for such a physically demanding journey but hoped for the best.

With such fears and often time unsure, Sara paddled passed everything with her strength and was welcomed with prayers and blessings. She documented the journey and the incredible people she met along the way. Thanking people who offered her water, fruit, and even those who even jumped in and cycled 10km with her along the way, according to a report via KSAExpats.

Her fans on social media expressed their joy and congratulated the iron women on her achievement.

On completion of her journey, Sara was joined by his brother and performed Umrah.