Roads and Transport Authority (RTA) has signed an agreement to develop sky pods built on suspended technology, it was revealed on Wednesday.

The Roads and Transport Authority (RTA) signed an agreement with BeemCar Ltd in order to develop the mobility solution, which will be built with steel wheels that run on suspended rails.

.@rta_dubai signs an agreement with BeemCar Ltd; one of the biggest developers of sky pods in the world. According to the agreement, the company will develop sky pods; a futuristic urban mobility system in Dubai, characterized by speed, safety & the efficient use of resources. pic.twitter.com/f6KABHdWHy

UK’s BeemCar Ltd, is one of the biggest developers of sky pods in the world, and will develop sky pods, a futuristic urban mobility system in Dubai.

Mattar Mohammad Al Tayer, RTA’s director-general and chairman of the board of executive directors and Chris Heaton-Harris, Minister of State at the Department for Transport, UK, witnessed the signing of the cooperation agreement between RTA and BeemCar Ltd. 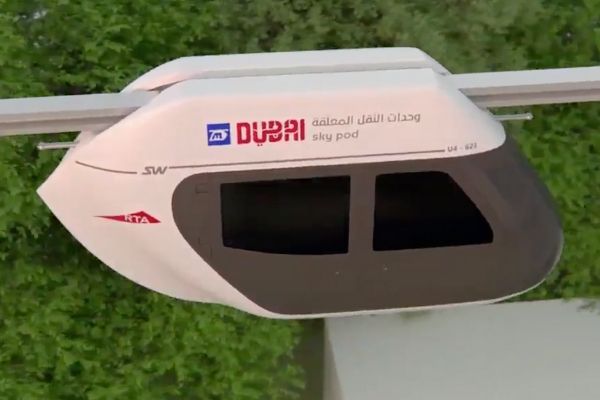 Abdul Mohsen Younes, CEO of Rail Agency, signed for RTA; and Robin Brownsell, CEO of BeemCar Ltd, signed on behalf of the company. Attendees of the signing included Andrew Jackson, the British Consul-General in Dubai, and several directors of RTA.

“The signing of the agreement is part of RTA’s efforts to deploy autonomous transit means in line with the Dubai Self-Driving Transport Strategy aimed at diverting 25 per cent of total mobility journeys in Dubai to autonomous transit means by 2030. The move corresponds to RTA’s efforts to enhance the integration of mass transit modes, and offer a solution to the first and last-mile challenge; which helps riders reach their final destinations,” said Al Tayer.

Heaton-Harris added: “This exciting collaboration will evaluate the feasibility of an aerial transit system based on BeemCar’s unique expertise. This is another example of the UK’s continued commitment to forging partnerships with the UAE across a broad range of innovation and technology.”

Such a collaboration is the means of sharing expertise between RTA and its counterpart in the UK in the field of rail operation, self-driving transport and control systems.

The Sky Pods – which will travel alongside the Dubai Metro – will be able to transport two to five people around set routes around the city.

The operation of such units occupies a land area several times less than conventional means of the same capacity. There are two versions of the sky pod currently in development.

The Unibike is set to travel at a maximum speed of 150-kilometres per hour, and will carry around 20,000 people per hour. The second model can travel distances of 200-kilometres, and carry up to 50,000 riders per hour.

The first model of the Dubai Sky Pod project, was displayed during last year’s World Government Summit in Dubai.

Sky pods are also power-efficient, small in size and light in weight, and mounted with steel wheels that run on suspended rails.

Though there is no definite date of launch announced, it is expected that the prototypes will start being tested by 2022.