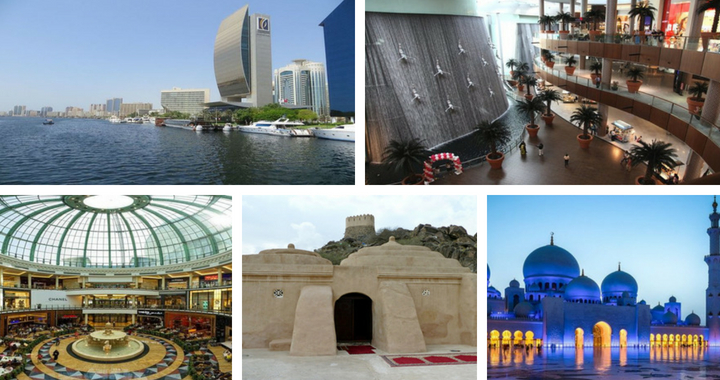 The United Arab Emirates has become a favorite holiday spot for families. Dubai’s towering Burj Khalifa and Abu Dhabi’s modern Sheikh Zayed Mosque have branded the UAE as luxury destination. The UAE is plentiful when it comes to both man-made and natural attractions.

Here’s the list of top ten tourist attractions in the UAE.

The oldest mosque Al-Badiyah is one of the countries and the Emirate of Fujairah’s most important historical sites. This building was beautifully designed with its original ventilation shaft patterns in the walls still visible. The entire surrounding area is an archaeological site, where many pottery and metal artifacts have been excavated.

The summit of Jebel Hafeet is a favorite day trip from Abu Dhabi and Al Ain. This is the second highest peak in the UAE and far-reaching, sumptuous desert panoramas greet you all the way up to the top on the winding road. After the twisting mountain road drive, you are able to see across the area’s vast sweep of desert.

The Sharjah Arts Museum is the most diverse art collection in the UAE. The museum is recognized for its collection of works by Arabic artists and also for its important pieces by European artists who specialized in painting the Arab world. The museum is also special for temporary exhibitions throughout the year.

Sheikh Zayed Grand Mosque is Abu Dhabi’s landmark building and it is the most popular sightseeing attraction in the city. Artisans used glass-work, mosaic tiling, and intricate carvings to spectacular effect on both the interior and exterior. It was opened in 2007. Able to hold 40,000 worshippers, it is the biggest mosque in the UAE and like the Sheikh Zayed Mosque in Fujairah, it is dedicated to the late Sheikh Zayed bin Sultan al-Nahyan.

This branded theme park is one of the city’s top things to do for thrill seekers and families. Small children can test out newly learned driving skills on the Junior GT track, while adrenaline junkies can buckle up and ride the Flying Aces rollercoaster, which clocks up speeds of 120 kilometers per hour on a 52-meter loop. There’s also a collection of Ferrari’s cars, with models dating back to 1947 and a Ferrari factory tour and Ferrari knowledge game show.

Dubai Mall is the city’s main mall and provides entry to the Burj Khalifa as well as the Dubai Aquarium. There is also an ice-skating rink, gaming zone and cinema complex if you’re looking for more entertainment options. The shopping and eating is endless and there are special events such as live music and fashion shows within the mall. The most famous of these are the annual Dubai Shopping Festival in January and February and the Dubai Summer Surprises Festival in July and August.

Deira lies on the northern bank of Dubai Creek. Deira is most famous for its traditional souks (markets), which bustle with shoppers at all times of the day. Deira Gold Souk is world-renowned as the largest gold bazaar in the world. The Deira Spice Souk sells every imaginable spice, with stalls overflowing with bags of frankincense, cumin, paprika, saffron, sumac, and thyme, as well as the fragrant oud wood, rose water, and incense. The fish market provides a much less touristy experience.

The Burj Al-Arab is the world’s tallest hotel, standing 321 meters high on its own artificial island on the Dubai coastline. The exterior of the building is lit up by a choreographed colored lighting show at night. The Burj Al-Arab is one of the most expensive hotels in the world, with the most luxurious suites costing more than $15,000 for one night. The way to experience the over-the-top opulence is to go for dinner at the underwater Al-Mahara restaurant, where floor-to-ceiling glass panels in the dining room walls allow you to view sea life while you eat, or you can enjoy lunch at California-style fusion restaurant Scape. For the ultimate panoramic views over the city, book afternoon tea at the Skyview Bar on the 27th floor.

Mall of the Emirates

Mall of the Emirates is one of the city’s most famous malls with the spectacular Ski Dubai facility inside. The indoor ski slope is complete with chairlifts and a penguin enclosure, all at a continuous temperature of -4 degrees Celsius. There’s also a cinema complex and a family entertainment center. The shopping opportunities are boundless as are the eating options, offering every conceivable world cuisine.