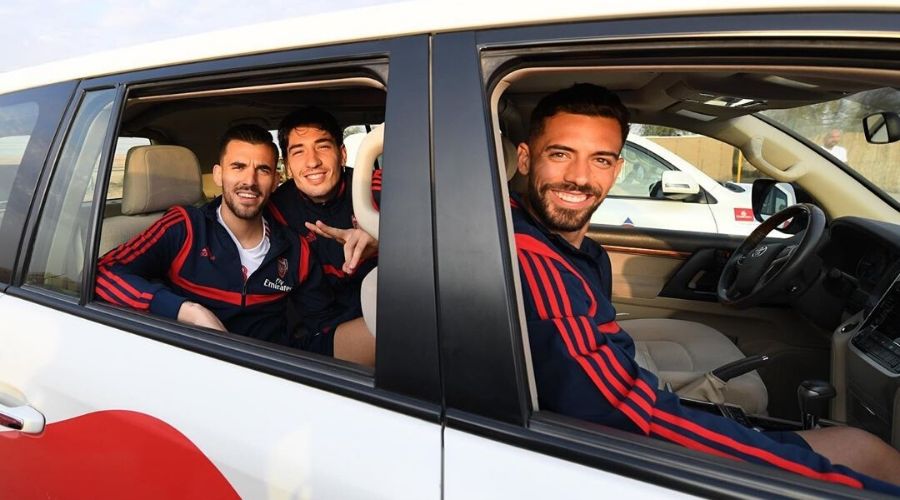 With the winter training coming to an end, Arsenal players continue to bond over in the Dubai desert. Arsenal made the most of their time in Dubai as they headed out on a desert safari during the final day of their warm-weather training camp in Dubai.

The players are in the United Arab Emirates for four days with manager Mikel Arteta believing the ‘mini pre-season’ will stand them in good stead for the remainder of the campaign.

‘We cannot be any happier with the conditions for us to train,’ he said on Monday. ‘We came here to work, it was like a mini pre-season.

‘I wanted to use it to work on our principles and our styles of play, and as well as how we live together’. The unforgettable experience was provided courtesy of Arabian Adventures and Emirates.

The players made their way into the dunes in 4x4s before taking photos while Pierre-Emerick Aubameyang and Alexandre Lacazette got on board a camel for the second part of their adventure.

The official Instagram for Arsenal posted the pictures with hilarious captions. They said: “Just two GOATs and a camel”

The players enjoyed a desert safari to boost team spirit and morale ahead of the second half of the Premier League season.

Some of the players enjoyed themselves as they petted the camels in the desert.

The team took the sun with open arms in their Arabian Adventures before heading back to the chilly weather in England.