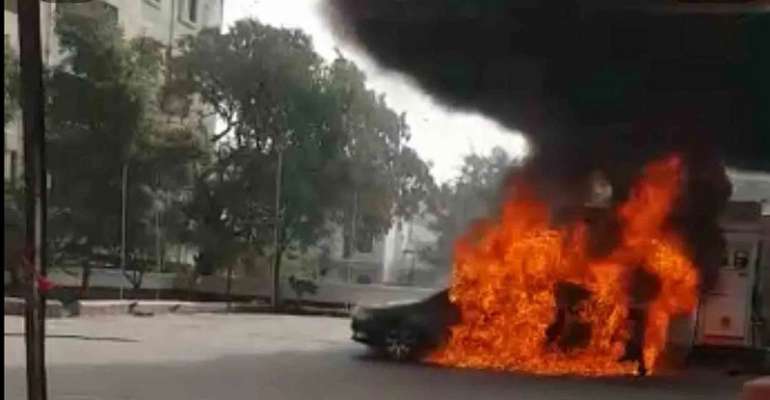 A video earlier today started circulating on social media where a car was shown horribly on fire inside a petrol pump in Hyderabad.

The fire control room received an alert at 2:06 pm about the fire accident which took place at an Indian Oil petrol pump in Shaikpet.

The Skoda Superb was dangerous to the fueling machines as the flames grew in intensity.

The black sedan caught fire when the driver went to the washroom while his car was being refueled. “Petrol spilled over and because the vehicle was overheated after a long-distance drive. As the car went up in flames, the driver and owner ran away from the area. The pump management reacted quickly and called 100 and fire service. Both reached within 5-10 minutes. The staff also helped and we were able to control the damage and prevent this from becoming really big,” a police official said.

The Driver, Hakeempet opened the rear seat to check. “Suddenly a fire broke out from the bottom of the car. Within seconds the fire spread”. No casualties have been reported so far.

The fire eventually spread through the gas station but was contained by the five fire engines which rushed to the spot soon after the blaze was reported. The car was completely damaged as the fire-fighters tried contained the blaze.

“The incident took place after a car which was being filled at the pump caught fire. The fire then spread through the bunk to the station. It has been doused now,” the police officer said.

The petrol pump has been closed for operations, and the management is yet to ascertain the damage in monetary terms.