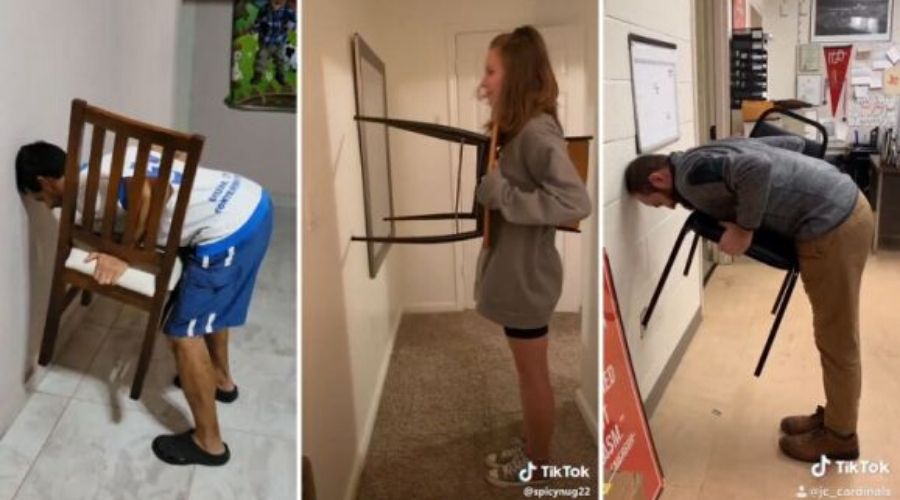 In a world where absolutely anything can break the Internet, there have been a few trends that have caused mass hysteria across the social media channels simultaneously. To name a few, #IceBucketChallenge, #KikiChallenge, #Planking, Baby Yoda meme and many more, the latest trend that has taken everyone by a storm is #ChairChallenge. The Challenge initiated on TikTok has become viral on all social media channels with the hashtag #ChairChallenge trending.

The challenge requires you to walk up to a wall and take two steps back – with each step being the length of your foot – before bending over at a 90-degree angle and placing your head against the wall.

Here’s the rub though, this challenge has male and female genders bidding against each other as it seems impossible for men to do this challenge as opposed to their women counterparts who have no problem doing it.

The reason is that their center of mass is much lower to the hips, whilst in lads, it is higher – and crucially, above the chair.

Cambridge Professor Brian Ford, on the other hand, argues that it is to do with shoe size. Men have longer feet than women. Two paces back for a man would be some 60cm, for a woman it’s more like 50cm. So to begin with, the man is forced further away from the wall.

“The man’s larger feet mean he is farther away from the wall than the woman and is thus leaning forward. The woman’s legs are closer to the wall, and are thus leaning back.”

This challenge is however not a new trend by any means, it dates itself back to as far as 1971. Oldest demonstration of this challenge can come from 1971 in the US TV series All in the Family, specifically, the episode Judging Books by Covers which first aired way back on February 9th, 1971.

With all the science and controversy behind it, one thing is for sure that this challenge is here to stay and dominate social media until the next big thing.