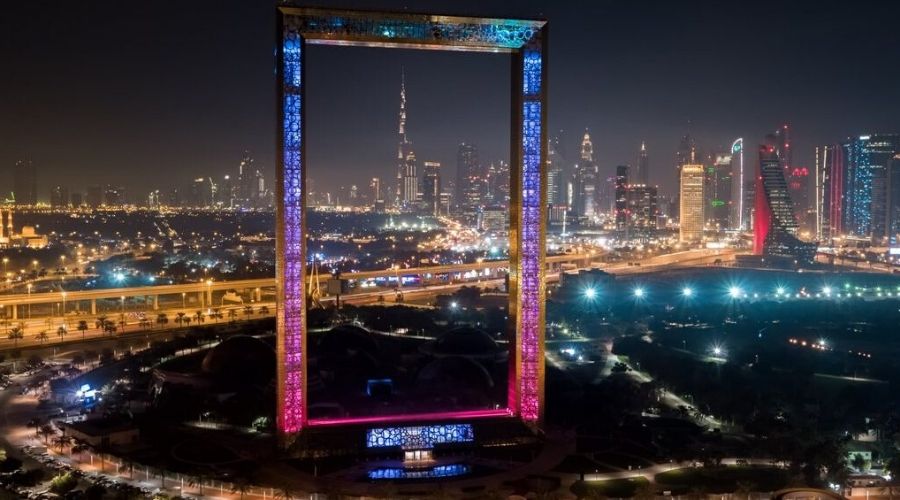 If you thought that New Year’s couldn’t get better in UAE with myriads of fireworks, galas, and concerts across the many cities, well then you were wrong. Because the legendary Dubai Frame for the first time ever has announced lighting up with a fireworks spectacle to ring in 2020, hosting a three-minute firework display, followed by a laser show.

The Iconic Dubai Frame is the cultural spectacle & landmark that frames impressive views of Old and New Dubai.

Many cites in the city are preparing to leave the onlookers awestruck with a parade of fireworks and laser shows. Burj Al Khalifa and Dubai fountains are all set to amaze the city.

Burj Al Arab also has planned a show apart above the shining waters of Dubai and while you wait for over 40 restaurants, serving delicacies from all around the world will be open until midnight with.
“The Island of Happiness”, Palm Jumeirah will put an array of fireworks at midnight and hosts the most amazing party for the spectators.

For a ‘New Year’s Eve Under the Stars’ Bollywood fans can head to Zabeel Park while celebrating some of India’s top hits with family and friends. Yo-Yo Honey Singh is also to perform a memorable show at the Bollywood Park in Dubai.

Global Village puts together a great show with live music, entertainment and diverse menus while featuring massive fireworks displays that will occur at the same time that the New Year is rung in at seven countries around the world.

Starting from 9 pm, enjoy IMAGINE, the laser, water and sound show put together every New Year’s Eve is perfectly complemented by the fireworks show.

Emerald Palace Kempinski is going to be hosting a four-hour bash at Palm Jumeirah offering a four-course dinner along with the tunes from a saxophonist and jaw-dropping performances.