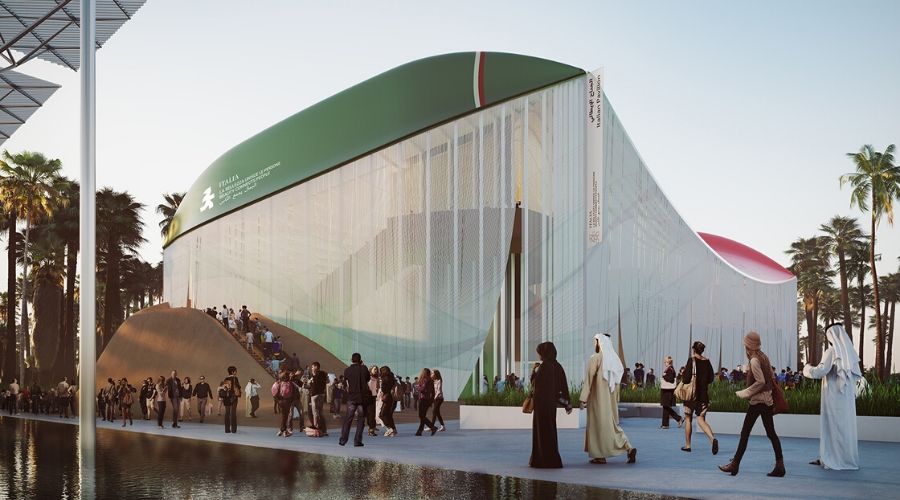 Conceived by Carlo Ratti Associati (CRA), Italo rota building office, Matteo Gatto & Associati, and F&M Ingegneria, Italy reveals its theme for Expo 2020 that is “Beauty connects People”. The groundbreaking was done by Italy, one of the very first countries to participate in the Global Expo, of the Italian Pavilion.

The groundbreaking ceremony was held at the Expo site in the presence of Stefano Buffagni, Deputy Minister of Economic Development of Italy; Nicola Lener, Italian Ambassador to the UAE; Najeeb Al Ali, Executive Director of Expo Bureau; and Paolo Glisenti, Commissioner General of Italy.

Located in proximity with the UAE pavilion on the ‘culturalspine’ of the Expo site, The Italy pavilion, will be covering an area of 3,500 square metres and reaching a height of almost 27 metres, demonstrating innovation and sustainability in aerospace. Italy expects an estimated 28,000 visitors on average daily for a total of over five million visitors during the six months of the Expo that will conclude in April 2021.

“We liked the idea of a pavilion that would continuously mutate into different forms, We pursued a kind of architecture that could be reconfigured both in the long term – because of its circularity – and in the short term – thanks to digital technologies.”  – Carlo Ratti, founding partner of CRA practice and director of the MIT Senseable City Lab at the Massachusetts Institute of Technology (MIT).

The heart of the pavilion, inspired by Renaissance theatres will be a real-size copy of Michelangelo’s David, one of the world’s most famous pieces of art.

Italy expects an estimated 28,000 visitors on average daily for a total of over five million visitors during the six months of the Expo.

The Italian Pavilion will take the visitor through a journey featuring three ships, the first ship will embark on a figurative journey to Dubai before being converted to form the structure’s roof. The boats — considered an exploration of recycling, circularity and digitally reconfigurable architecture — will move on and be reused elsewhere, after the event is over.

20 Mother’s Day Gifts That Every Mother Will Adore