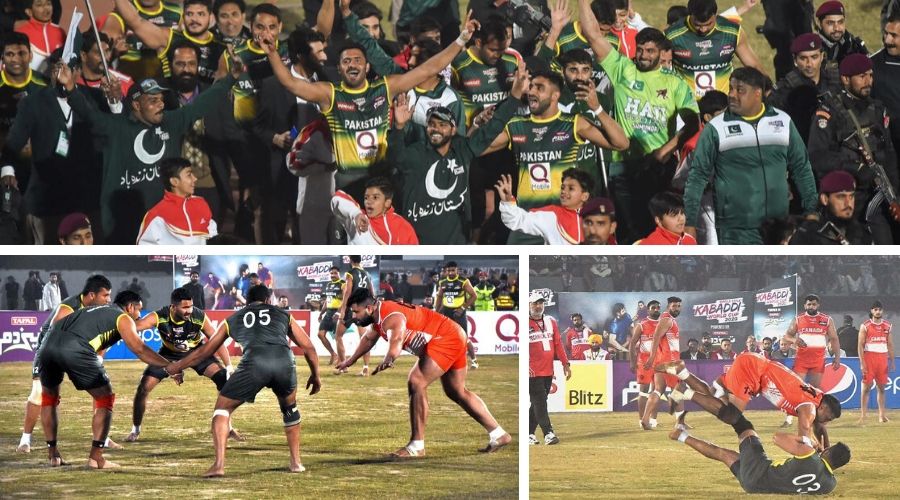 Pakistan becomes the world Kabaddi champions for the first time playing against the Indian team at Lahore’s Punjab Stadium on Sunday.

The match was rather close, the host Pakistan won the toss and selected to raid first. Initially, the match looked one-sided with India leading in the first session.

There were objectives raised by couch Harpreet Singh of the Indian team on the score by Malik Binyameen. The trio of Binyameen, Irfan Mana and Shafiq Chishti got a great hold on the opposite team. The audiences applauded and held the winning team on the shoulders.

It was the first time the Kabaddi World Cup was held in Pakistan and held in different cities, Lahore, Kartarpur, Nakana Sahib and Faislabad.

Along with Pakistan, Indian, other teams that participated in the event were the USA, Sierra Leone, Canada, Iran, Kenya, and Australia.

Amazing scenes from Punjab Stadium, Lahore. More spectators outside the stadium to witness #Kabaddi than jam packed enclosures inside.
Field Kabaddi should be revived at all costs. This sport has billions of followers across the world.
Glad 🇵🇰 hosted #KabaddiWC2020 🏆🤼 pic.twitter.com/cEtUjl9Oxi