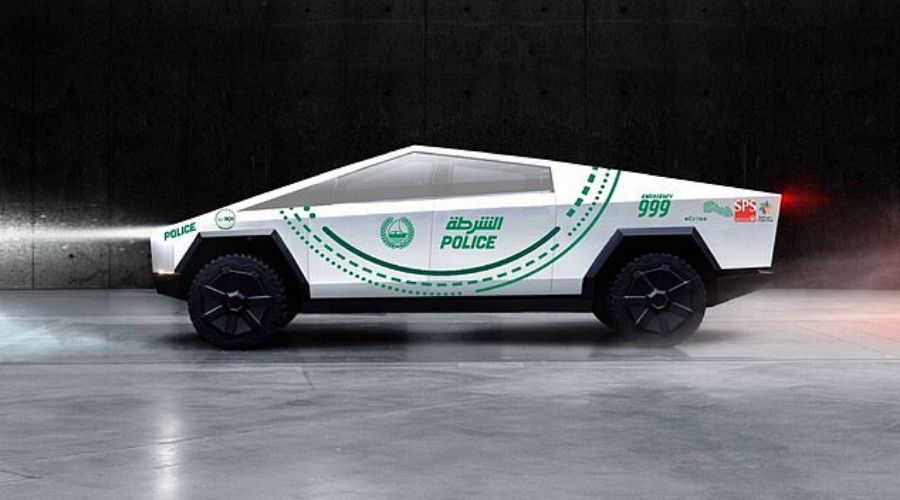 The best way to describe the Latest Tweet by the Dubai Police is that it has left everyone hanging in the air and literally scratching our heads.

Dubai Police Force already known for its high-end vehicle fleet which is a part of their crime-stopping rides tweeted a picture of Elon Musks All-Electric Cybertruck with the logo of Dubai Police on it.

On 21st November Elon Musk partnering with Tesla launched his Cybertruck on a Global Platform for the world to see. With a history of Misleading Twitter Trails, Elon Musk made some huge claims about this latest invention of his which all fell flat when attempted to figuratively demonstrate the power of his “shatterproof” windows by throwing a ball at it and shattered not only the window but also Tesla’s stock by more than 6%.

But this Launch Debacle did not have a lasting effect as the orders for the Cybertruck have been growing ever since. A recent tweet by Elon Musk showed Dubai Police was not just the only ones in love with the new Invention as the tweet boasted that there had been “146k Cybertruck orders so far … with no advertising”. On Sunday, he tweeted: “200K”. And on 25th November, Tesla stock also climbed by 4%.

The Futuristic Pick-Up Truck seats six passengers and comes in three different models with price ranging from $39,900 to $69,900 featuring single, dual and Tri-Motor Model.
But at this point, the wait for Dubai Police is going to be long and remain patient as the Production for the Cybertruck rolls off in 2020.