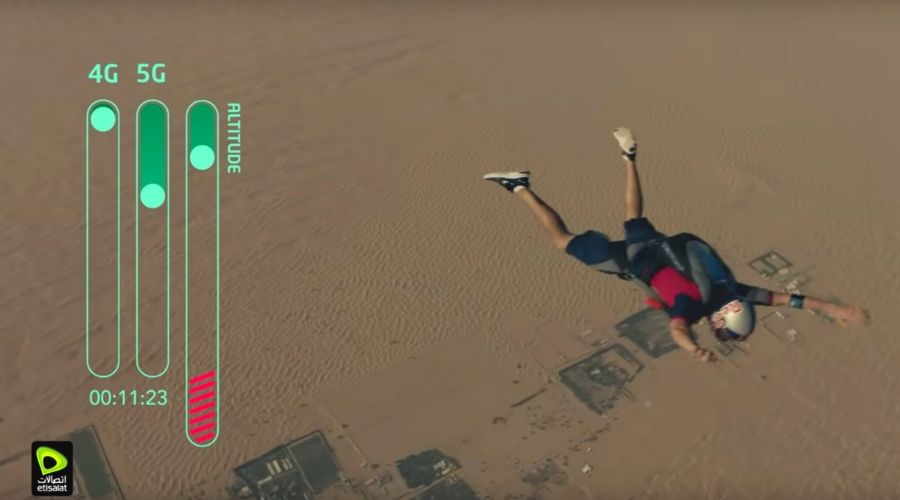 In today’s dynamic world of innovations and inventions continually popping up around every corner, the competition to get to the top is a game that requires an “oomph factor”.

Etisalat has managed to deliver the excitement by attempting to test their data reach at the height of 15,000 ft. Through an adrenaline-pumping freefall from 15,000 feet, Etisalat has demonstrated its 5G technology.

In a new video released by Etisalat in partnership with Redbull, skydiver Dani Roman, who has been adventuring in the skies of the world since 2016, jumps off a plane to find out whether you can download a 4GB app using mobile data in time to open a parachute.

“Will Etisalat 5G be able to complete a 4GB download in time to open my parachute?” asks the Spanish professional skydiver in the video.

“There’s only one way to find out”, he says. Etisalat tests whether it can download a 4GB game for Mohammed Al Kaabi, an Emirati YouTuber with a channel called UAE Skills, just in time for Dani to open his parachute.

On average, skydivers need to deploy their parachute after 30 seconds from 15,000 feet.

What seems like a regular skydive is anything but that as Dani continues to descend, Mohammed and Etisalat’s monitoring team excitedly wait for the game to finish downloading in 30 seconds. Etisalat effortlessly downloads the 4GB game on its 5G network in less than the set time. In contrast, 4G could only download 0.75GB for the same duration of 30 seconds.

Only after the download is done Dani was given the cue to deploy his parachute, making this a rather jaw clenching event.