In the midst of the ongoing #MeToo movement, another victim comes to the forefront sharing her struggles due to the uncouth behavior of the men around her. This time a Dubai based model, Merhan Keller, has claimed Dh1.4 million in damages against an Egyptian presenter she claims insulted her on live television.

The model was targeted as the subject of humiliation after Keller publicly revealed inappropriate advances made to her by Egyptian footballer Amr Warda during the African Cup of Nations in June. Merhan Keller had released the myriad of messages that Warda had sent her that entailed pushy language aggressive responses.

Following the ongoing scandal, Warda has shut down his Instagram account, where he formally had 2 million followers and was suspended from the team, but then re-instated after winning support from teammates including Liverpool star Mo Salah.

Using all this as a basis, the prime-time television presenter in Egypt, Tamer Amin, went on to treat Keller as the butt of all his inappropriate jokes. 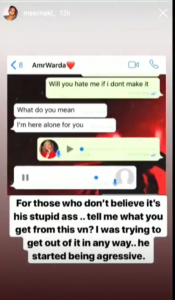 Ms. Keller claimed: “This case is not just about media, but many media anchors and channels in Egypt that have been insulting people publicly, without considering the damage they are inflicting.”

“Mr Amin did not even call me to ask for my opinion or talk about the issue. Instead, he focused on the way I looked, stating someone as ugly as me could not be a victim of sexual harassment. He created a trend and made it funny to victimise me.”

Whereas Amin holds his ground by claiming that he “may have spoken sarcastically” but was “shocked” when he was told of the court hearing.

Amin also carried out the conversation on his show where addressed the problem between the model and some players of the Egyptian football team on June 24 during a show presented by national broadcaster Al Nahar.

According to Keller’s lawyers, the talk suggested the model of harassing the Egyptian footballers during a pre-tournament training camp.

Keller is demanding maximum punishment for the TV anchor for the insult and defamation that he has caused. But as the case became more public, Keller claims to have received death threats and suffering sexual harassment on social media from online trolls.

“My mother has been harassed endlessly in the street and couldn’t go outside to buy groceries for months,” she said. For Warda or Amin, this is not the first time that they have been accused of inappropriate behavior. Other women emerged since Keller’s sexual harassment, claiming they were also sent similar explicit material from Warda, becoming Egypt’s #MeToo moment.

Amin too has been previously suspended due to his ill-natured comments on the husband of former Egyptian swimmer Rania Elwani.

Regarding his disparaging comments about co-parenting, complaints were submitted to the Supreme Media Council against Mr. Amin by the National Council for Women.

Amin continues to deny the allegations as he says that the news was already public information since she decided to publicly reveal the revolting posts from Warda, she became open to criticism and comment.

The case is due to be heard at the Nasr City Misdemeanor Court in Cairo on Thursday, January 30.

“I may have spoken sarcastically, but that was within the permissible media criticism and analysis which included neither insults nor defamation,” he said. “It would have been defamation if I had mentioned her or posted a photo of her for no reason, but she was the one who spread the news by publishing the posts from Warda. “I respect everyone and have no issue with Ms Keller, who I do not personally know. “Public figures have to accept criticism, even if it is sarcasm.”

Naimal Nadeem
Tabinda writes about the current happenings across the world and new launch reviews with special emphasis on Keywords and Topics for maximum viewer readership. Tabinda has experience in advertising for major brands overseeing thier strategy and execution operations.