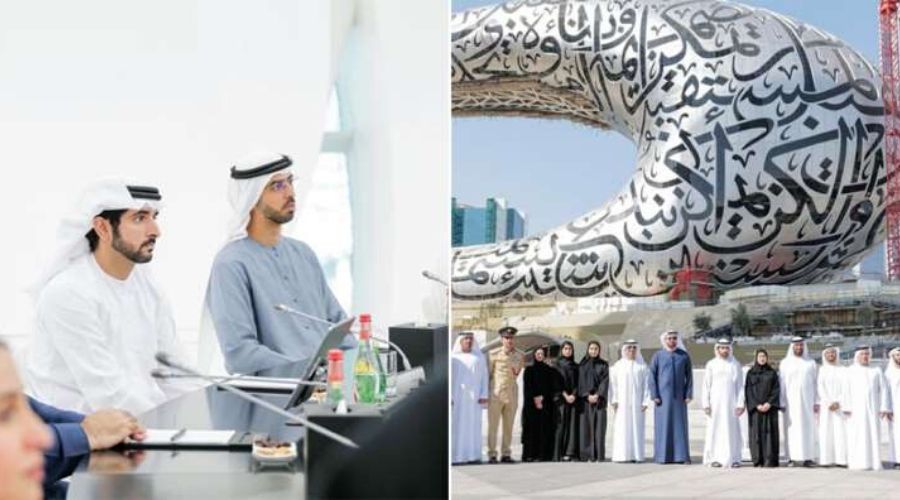 The stunning facility worth Dh500 million, Museum of the Future, is nearing its completion and to review all the aspects of the attraction Sheikh Mohammed bin Rashid visited the under-construction Museum in Dubai on Saturday.

Designing our own future is the key to actualising our dreams & aspirations. We look forward to making the Museum of the Future a global destination for experiencing the future, an incubator for talent and a window into the world of tomorrow.

During the meeting, the Dubai Crown Prince approved the foundation’s three-year strategic plan. The strategy ‘defines frameworks and goals to enhance the foundation’s role as a world-class research platform and a knowledge hub for Dubai government officials to anticipate and create the future of strategic sectors.’

#Dubai Crown Prince @HamdanMohammed chairs a meeting of the Board of Trustees of the @DubaiFuture Foundation. The meeting was held at the Museum of The Future, project still in the making but is set to be a new world icon. pic.twitter.com/Q7bvuuKgto

Sheikh Mohammed was accompanied by Sheikh Hamdan bin Mohammed, Crown Prince of Dubai; Sheikh Maktoum bin Mohammed, Deputy Ruler of Dubai; and Mohammed Gergawi, Minister of Cabinet Affairs and the Future, among others.

The museum will be a research centre with labs and classrooms, as well as space for visitors to experience the latest technology.

The Museum of the Future is a unique incubator for futuristic innovations and design in Dubai, UAE.

Sheikh Mohammed highlighted the fact that artificial intelligence (AI) will add US$15 trillion to the world’s GDP within a period of 12 years, and said: “The Museum of the Future is a unique incubator for futuristic innovations and design We are determined to make the UAE a major contributor to future development.”

Opening in 2019, the Museum will become the world’s largest and most exciting way to discover Future’s trends and opportunities.