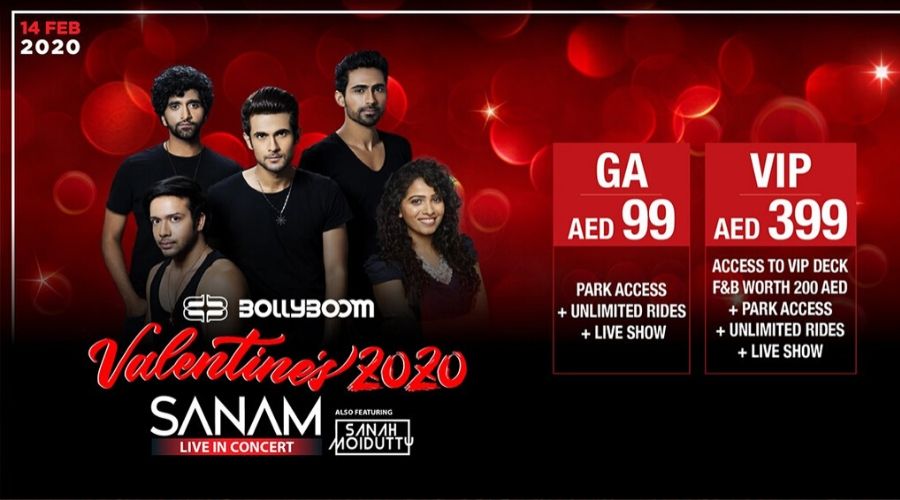 The celebration of your love is right around the corner and Dubai has some major events planned to intensify the energy of Valentine’s Day. Witness Bollyboom Valentine’s 2020 with Indian pop-rock band Sanam ft. Sanah Moidutty Live on 14 Feb only at Bollywood Parks Dubai.

This Bollywood band is famous for producing renditions of some of the most iconic Bollywood songs that will be a treat for the Emirates. This is the second time Sanam will be performing in Dubai. Bollywood Parks is known for regular celebrity events and performances on the New Years’ night Yo Yo Honey Singh performed at Bollywood Parks in front of a huge audience.

The event will also feature Indian singer and songwriter Sanah Moidutty, who is trained in Carnatic and Hindustani classical music as well as western vocals. Sanah was awarded “Best Singing Sensation” for the year 2017 at the Asia Vision Movie Awards 2017 for the song Afeemi from Meri Pyaari Bindu.

The show will feature the full band line-up – amazing singers, guitarists, and composers including Sanam Puri, Samar Puri, Venky S and Keshav Dhanraj. The artists will present their own share of original songs, and what they are most famous for are covers of Hindi songs, predominantly old popular songs of Bollywood.

The titled BOLLYBOOM Valentine’s 2020 has been organized by Percept Live and Media Agency the Middle East in partnership with Bollywood Parks and is the second concert presented by Bollyboom.