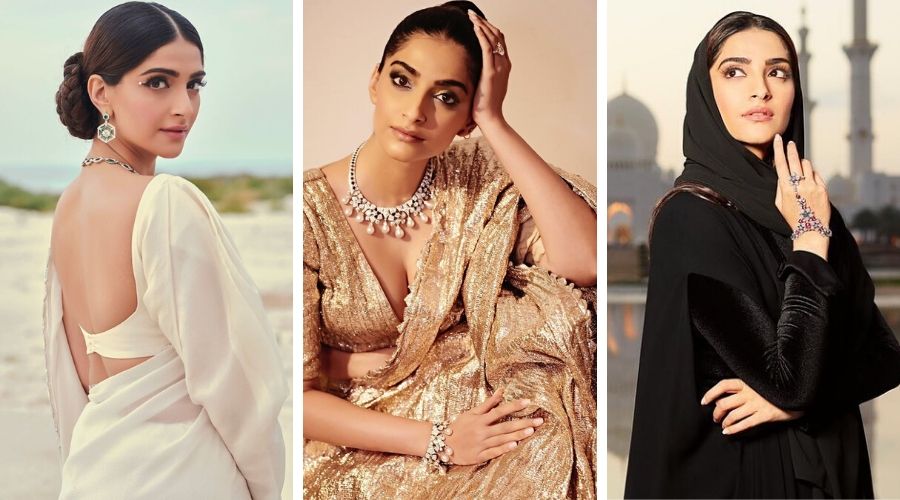 The style icon of Bollywood, Sonam Kapoor Ahuja, has landed in Abu Dhabi as she joins forces with Bulgari for the launch of their latest collection.

Sonam Kapoor joined her team in Abu Dhabi to be the face of Bulgari’s latest jewelry collection ‘Jannah’, a partnership between the Italian brand and Shaikha Fatima Bint Hazza Bin Zayed Al Nahyan.

On February 11, the Louvre Abu Dhabi played host to a star-studded jewelry launch which saw the attendance of the crème de la crème of the Emirates.

The high fashion Jeweler show lit up the Louvre and describing the collection Ahuja said, “Inspired by the five-petal flower adorning the marble ceilings of the Shaikh Zayed Grand Mosque, the jewellery is a union of cultures and heritage”. The collection themed as, ‘Five Petal Story’ talks about the journey undertaken of two mystical cities: Abu Dhabi and Rome. The campaign saw her filming at several landmarks in Rome and Abu Dhabi.

Sonam Kapoor was invited for a private viewing at Louvre Museum with Her Highness.

JANNAH, A FIVE PETAL STORY A journey shared between two wondrous cities; crafted with joy and passion.The first of its kind, with Her Highness Sheikha Fatima bint Hazza bin Zayed Al Nahyan of the ruling United Arab Emirates Royal Family & Bulgari the Jannah Collection is the embodiment of both Bvlgari and Her Highness’s joyful and passionate love for life and devotion to heritage. @Bulgari #HighJewelry #Jannah #FromRomeToAbuDhabi

“We have shot such a beautiful campaign and some stunning pictures that shows similarities between two cultures and not differences that we have been focusing on in this day and age … We shot in the mosque, desert and also the Spanish Steps in Rome. It’s just spectacular,” the actress said.

#RomeToAbuDhabi, how does that sum up the collection:

#RomeToAbuDhabi was seen on social media being used for this collection. After asking Ahuja if she had shootings in both location, she said:

“So we shot in iconic landmarks like the Spanish Steps in Rome and at the Shaikh Zayed Mosque and Louvre Museum in Abu Dhabi … Jannah is ‘jannat’ meaning paradise and it was the Jannah five-petal flower that Lucia [Bulgari’s Creative Director Lucia Silvestri] and Her Royal Highness [Shaikha Fatima] saw at a mosque.

So Proud to be the face Of the Jannah collection by Bvlgari created by Her Highness Sheikha Fatima bint Hazza bin Zayed Al Nahyan of the ruling United Arab Emirates Royal Family & Bulgari the Jannah Collection is the embodiment of both Bvlgari and Her Highness’s joyful and passionate love for life and devotion to heritage. @Bulgari #HighJewelry #Jannah #FromRomeToAbuDhabi

That’s the whole centre of the collection that underlines the similarities between their cultures and heritage. The collection goes so well with Indian clothes that I wore a golden lehenga with zardosi work on it and paired it with a beautiful necklace with Jannah flowers on them on the launch night in Abu Dhabi”.

The story behind the birth of the Jannah Collection is one of love and dedication. One of the recurring themes shared in this collaboration was Her Highness Sheikha Fatima’s admiration for her grandparents and their tireless pursuit for tolerance and peace in the region. Keen on preserving UAE’s heritage and infusing it with it’s future outlook, this partnership echoes the richness and heritage of the UAE. @Bulgari #HighJewelry #Jannah #FromRomeToAbuDhabi Outfit: @itrhofficial Jewels: @bulgari Bag: @lilianafshar Make up: @artinayar Hair: @alpakhimani Style: @rheakapoor Styling team: @spacemuffin27 @sanyakapoor @manishamelwani @aleeyasheikh Photographer: @thehouseofpixels Manager: @neeha7

The actress and diva also detailed of how her collaboration came about. ”I have worked with Bulgari before on a couple of things and I have launched one of their collections before. But here they wanted me to be the face of Jannah Collection. Her Royal Highness [Shaikha Fatima] thought I should be a part of it too … It was also amazingly sweet that a granddaughter is paying homage to her grandfather [founding father of the UAE, the late Shaikh Zayed Bin Sultan Al Nahyan]. This collection has got such rich heritage, art and design. We have so much intolerance these days. This collection is about celebrating each other and that is something we should be proud of”.

Spent a beautiful night yesterday at the @louvreabudhabi celebrating the launch of the newest collection Jannah from @bulgari in collaboration with Her Highness Sheikha Fatima Bint Hazza Bin Zayed Al Nahyan. I wore a beautiful dress by my dearest @deanashaaban ♥️ and was adorned in beautiful colourful @bulgari jewelry ✨