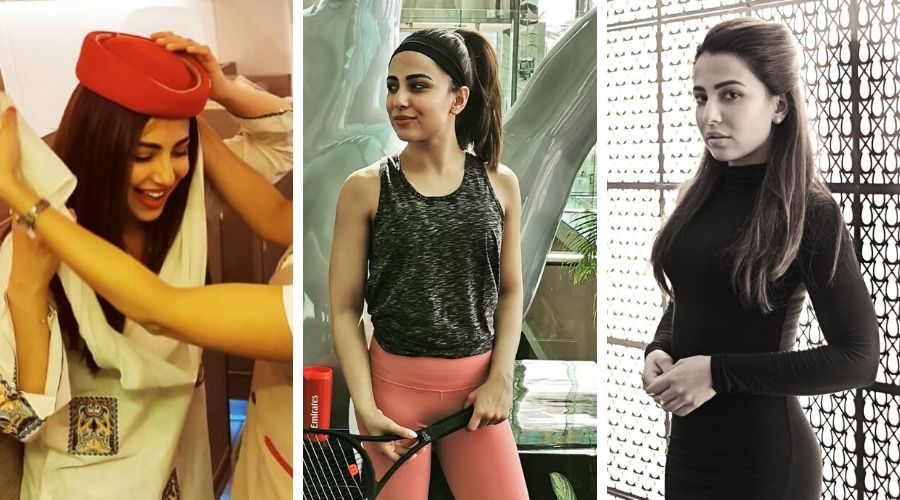 Shah makes her way back to Dubai shortly after her last visit which was to attend the prestigious PISA Awards that happened in Coca Cola Arena, Dubai.

Shah is a regular visitor to the Emirates as her Instagram is stocked of her enjoying precious moments in Dubai.

This time while travelling, Shah mixed things up a little bit and after interacting with the staff on her flight to Dubai from Karachi, Shah ended up dressing as one of the Air Hostess for the Emirates as a friendly gesture from the cabin crew.

She wrote on her Instagram: “Also I DONT KNOW WHY but I’ve never worn eastern wear outside of Pakistan unless it was for a family function, a wedding or Eid. This felt so amazing! I need to do this more often”.

After arriving to Dubai, Shah has posted a ravishing look where she dawns athleisure with a Tennis Racket over which she has expressed her joy as it is not an ordinary racket but Roger Federer’s personal and practicing racket. Shah has gotten this racket signed from the Tennis Superstar and plans to frame the priceless possession.

Shah has been enjoying taking gorgeous selfies while at Dubai Duty Free Stadium and soaking up sun on her holiday in Dubai.

Shah is currently seen on ARY Digital in drama serial “Bewafa” where she plays the role of the antagonist. Shah has worked in some big projects like “Punjab Nahi Jaungi”, “Bashar Momin”, “Alif Allah aur Insaan” and many more where she has played pivotal roles.