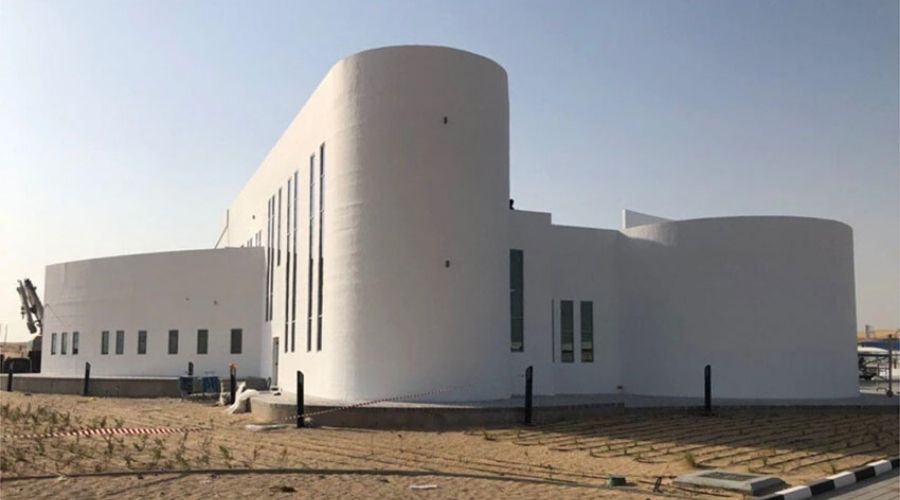 A time-lapse video that was screened during the opening ceremony showed how the 3D printer constructed the building layer by layer.

The entire cost of the project was only 140,000 dollars: the technique cut both building and labour costs by 50 percent compared to conventional buildings of similar size, according to Reuters. While the conventional construction could cost up to Dh2.5million for a similar building.

The building has passed all the safety checks and will have normal durability as the conventional ones, said Al Hajiri.

He said the success of the project shows that there is an opportunity for the 3D printing companies. “Dubai is becoming a hub for this kind of technology.”

The Boston-based company had quite the challenge on their hands as the process of building this building was made difficult due to the difficult and harsh weather of Dubai. As such, materials were developed to be used in the printing process for this particular building had to be able to withstand extreme heat and cold. “The Dubai climate is very harsh — temperature and humidity change significantly even within a day,” said Nikita Cheniuntai, founder and CEO of Apis Cor. “The material has to behave the same way all the time, despite the changing environmental conditions.”

Efficiency of the Project

Along with three workers and a single construction crane, the machine printed out the structure section by section using Apis Cor’s gypsum-based mixture. Later, traditional construction methods were used to install the windows and roof, and rebar supports were added to reinforce the walls.

“It wasn’t an easy project. It was a difficult project to achieve,” said Al Hajiri. “We have succeeded. It is a global achievement and a turning point at the local and regional levels.”

Waleed Mosaad, project manager with the Building Permits Department explained a pump kept inside the printing machine pumps out the raw materials for construction and forms the layers.

Unlike the traditional method of construction, which depends on the work of tightening wooden pieces with nuts and bolts, reinforcement and pouring of concrete and making bricks, Al Hajiri said the walls are printed directly from the printer.

In May 2016, Dubai opened the first 3D-printed office in the world, the Office of the Future. His Highness Shaikh Mohammad Bin Rashid Al Maktoum, Vice-President and Prime Minister of the UAE and Ruler of Dubai inaugurated the unique building in the premises of the Emirates Towers. It houses the temporary office of the Dubai Future Foundation.

Al Hajiri said Dubai Municipality had already formulated rules and regulations for the implementation of 3D printing technology in the construction sector.

Dubai aims to construct 25 percent of the future buildings using 3D printing and become a leading global center of 3D printing by 2030.