ToTok is back on Android, Apple users still Disappointed

With apps like Skype and WhatsApp being not licensed by the authorities, many apps have come in the UAE market to fill in this gap. One such success was the free internet calling and messaging service known as ToTok. Downloaded and used by millions on a daily basis after Botim started advertising across the internet of its services now free of charge under ToTok for the user, the app was suddenly removed from Google Play Store and Apple Store. The app was removed a week ago over unfounded allegations it was used for government spying.

Totok addressed this saying in a statement: “ToTok is temporarily unavailable in these two stores due to a technical issue. While the existing ToTok users continue to enjoy our service without interruption, we would like to inform our new users that we are well engaged with Google and Apple to address the issue.”

The free video messaging service Totok has been reinstated on the Google Play store, the company said on Saturday.

“ToTok is already available in Google Play. We hope in the next few days, ToTok will be back to Apple Store as well. Enjoy using ToTok. Thank you again and happy new year,” the company announced in replies to Twitter users.

The allegations on the app came after McAfee and Samsung security scan identified ToTok as malware. 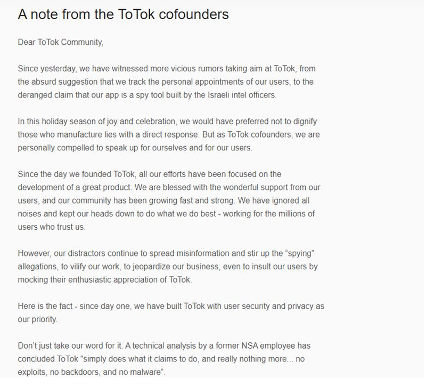 The statement said: “A technical analysis by a former NSA employee has concluded ToTok ‘simply does what it claims to do, and really nothing more… no exploits, no backdoors, and no malware’.”

The co-founder of ToTok, Giac addressed the issue and also he asks for the support “to reinstate ToTok in app stores” to the Google and Apple stores.

He went on to deny affiliations to any governments and that ToTok does not collect conversation data.

On its platform, Google lists a series of “updates” to the app, including requesting access to permissions and data and a “newly designed dialog to ask your authorisation of accessing and syncing your contact list”. Apple App Store doesn’t have the app at the time.

ToTok became the attention of millions of users in UAE after its announcement that “ToTok is a free, fast and secure calling and messaging app that allows you to enjoy voice and video calls with your family and friends anywhere, anytime, without any limits,” the announcement that the Botim team sent to its subscribers said. 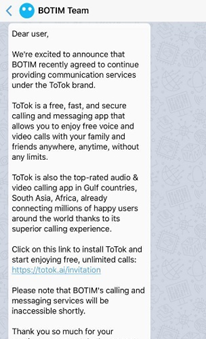 During ToTok unavailability, many other alternatives were used by users like Squad and other apps that are licensed by the Government like Yzer, C’ME, HIU Messenger amongst others.

All the while this is going on, Mohammad Al Kuwaiti, executive director of the UAE’s National Electronic Security Authority said the UAE is in talks with WhatsApp – bringing up hopes for the possibility of WhatsApp calls being made available in the UAE. “There might be a lift of that ban for [WhatsApp] voice calls… and this is going to happen soon, this is what we know and understand from the telecommunication authority here in the UAE,” said Al Kuwaiti.

Naimal Nadeem
Tabinda writes about the current happenings across the world and new launch reviews with special emphasis on Keywords and Topics for maximum viewer readership. Tabinda has experience in advertising for major brands overseeing thier strategy and execution operations.